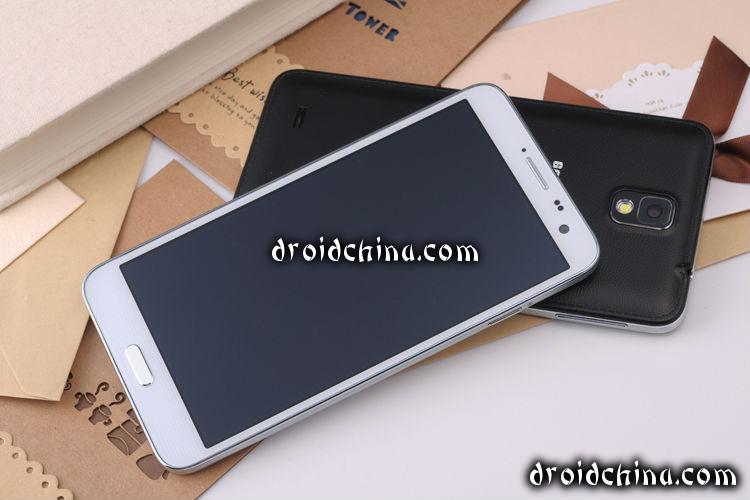 The Goophone N3 is an almost stitch-for-stitch copy of the more renowned Samsung Galaxy Note 3 and not even just looks wise. With a 5.7 inch display, it copies Samsung’s Note 3 on dimensions but not quality. The Goophone N3 has a 5.7 inch full HD IPS OGS screen whereas the Samsung Note 3 has that remarkable super-fine AMOLED screen. However, to the naked eye, it doesn’t show much difference unless you have been thoroughly desensitized by the actual Note 3. Nevertheless, the screen responds beautifully with clear colors and viewing even from extreme angles though you will face some difficulties viewing it in direct sunlight. Aesthetically, the Goophone performs above average. It has a beautiful plastic, pliable cover with a texturized finish and faux stitching all round the edge that gives it that sassy leather-ish look and feel. All round the edge, there’s a chrome shiny band with inlaid grooves that really helps with grip. The power button is on the right while the volume rocker is on the left which helps eliminate those accidental snafus that come with phones with both on one side. 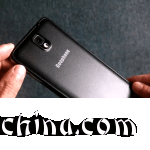 Within, the Goophone mimics the Samsung Note 3 almost impeccably. Following usual android tradition, the apps are located in the app drawer. Settings are easily accessible from the pull-down menu on the home screen. Of particular pleasure is that you will find that the Goophone N3 responds magnificently to touch. You can swap through multiple pages on the home screen at ultra speeds without any lag or tailing.

Running on the android 4.2 Jelly Bean, the Goophone N3 has 2GB of RAM and 16GB ROM and is powered by an MTK6592 octa-core processor clocking 1.7GHz. As expected, it performs well even on hardcore applications requiring high processor speeds. However, I found that it stutters and strains loading the Asphalt 8 which admittedly has more demanding requirements. The phone operated decidedly better though once the game was loaded and running.

As with the original Samsung Galaxy Note 3, the Goophone N3 has smart features that you will find remarkably pleasing. It has copied almost perfectly the Smart Scroll feature that enables scrolling based on the tilting of you head. The Smart Pause feature also works passably though I found that you need more jerky head movements for the phone to recognize that you are not facing the screen and pause the video I was watching, or dim and switch off the screen. In addition, the air gestures were a tad bit sluggish to respond which ended up with me almost flapping my hands all over the place to get it to swipe through pages on the home screen.

To its credit though, the camera function is quite ok. The Goophone N3 has a 13 megapixel camera with LED flash that will take clear picture and high quality photos. The camera utility has autofocus for that clean edge photo you might require. The front facing camera is 5 megapixels with light and proximity sensors, nothing very outstanding about it. For your storage needs, it supports expanded memory up to 32GB with a MicroSD card.

What I found a little bit disappointing with the Goophone N3 was that it only supports 2G and 3G networks and load 4G or LTE networks. However, it performs acceptably with fast loading speeds for web pages and GPS. For all those who love tinkering with their phone to tweak here and there, the Goophone is not rooted and you might need to look elsewhere.

All in all, the Goophone N3 has its own merits if considered on its own rather than in comparison to the Samsung Galaxy Note 3. It responds quite well on its multitouch full HD screen, has a ton of handy features adopted from the Samsung Note 3 and the icing on the cake? You can get it for a fraction of the Galaxy Note 3 as it only retails for US $ 230.