GlobusGPS GL-900 VIP – new smartphone Navigator Russian company that specializes in GPS-navigators. Because the navigation function for a modern smartphone has become the core, then GlobusGPS engaged and these mobile devices.

Key Features GlobusGPS GL-900 VIP: a huge 5.8-inch HD display, productive platform MT6582, support for two SIM and rigorous, solid appearance. Moreover, the device is impressive grade. In it, among other things, includes a “smart” cover, car holder and Auto Chargers. And all this in Russia officially can be bought for 8,990 rubles ($ 250).

A few words about the design. Externally GlobusGPS GL-900 VIP mimics the flagship Samsung Galaxy Note 3 . It could be called a clone, if not some of the nuances. For example, GlobusGPS GL-VIP no stylus 900 and, accordingly, the holes under it. There are other notable differences. But overall GlobusGPS GL-900 is very similar to VIP masthead smartphone Samsung, which makes it even more attractive to buyers looking for a cheap alternative topu.

Headset with a microphone, can be used for voice communication. Sound quality is not high. 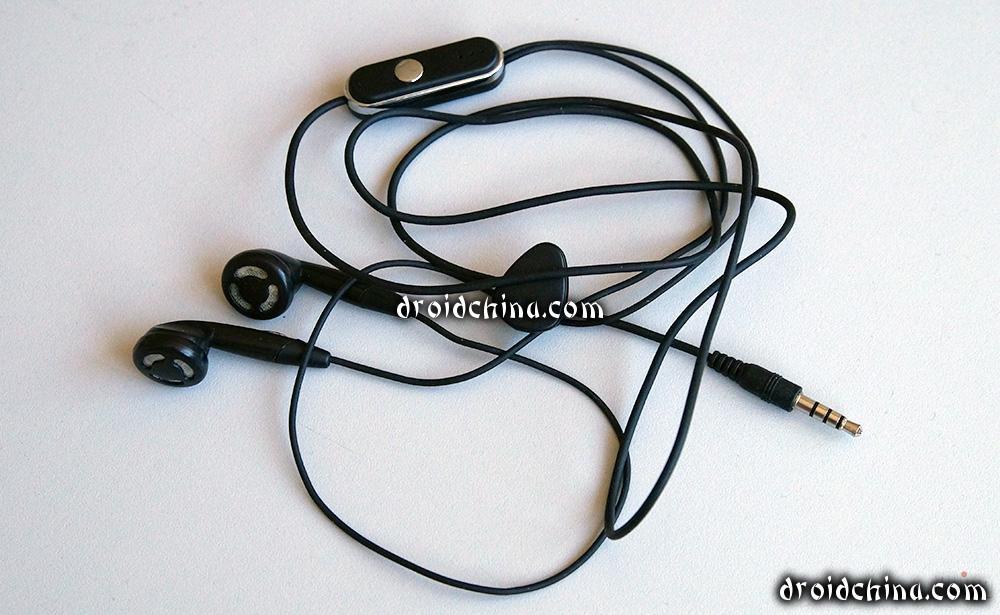 Charger unit with an output current of 1 A. The plug standard. 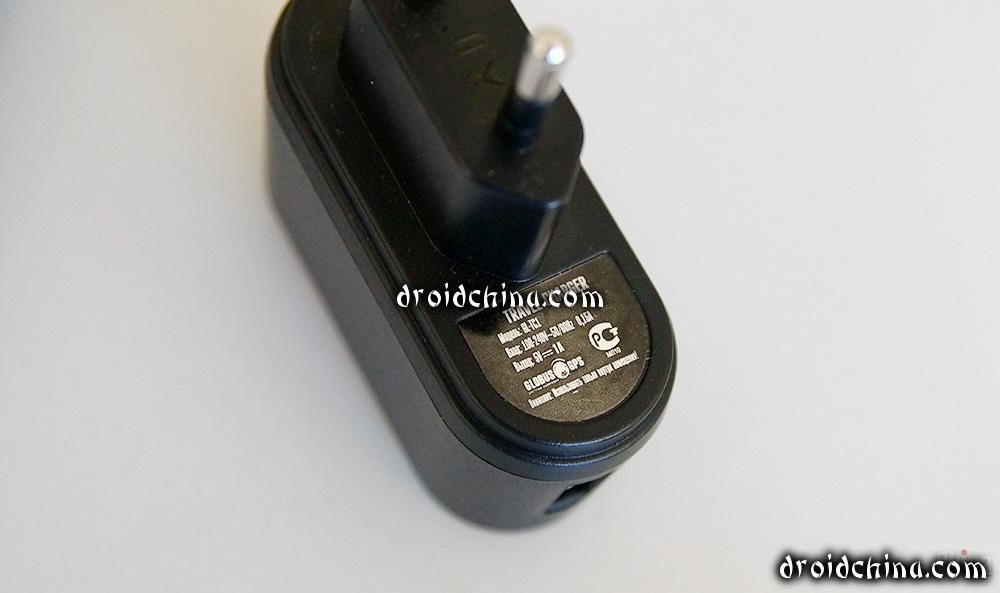 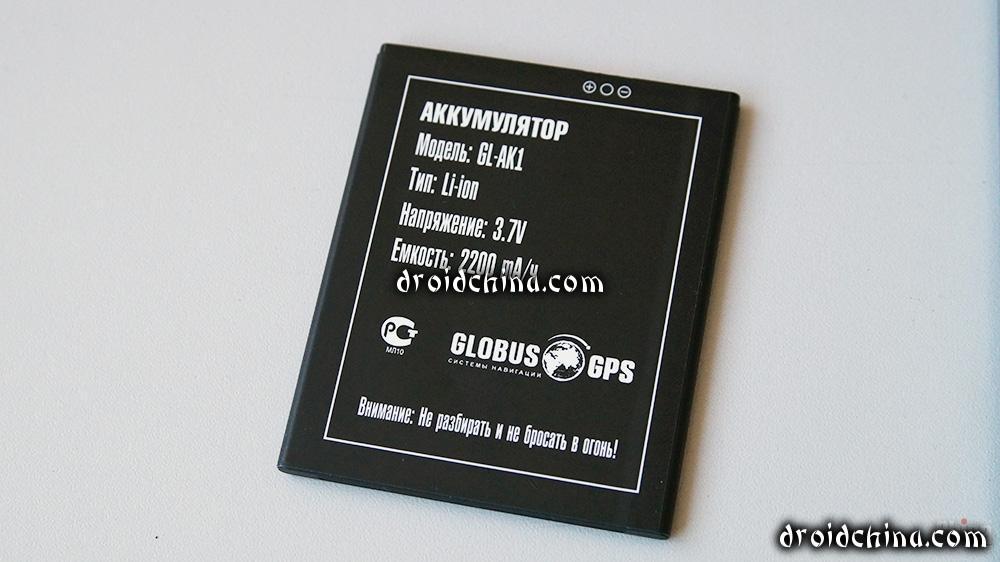 There is a warranty card and instruction in Russian. 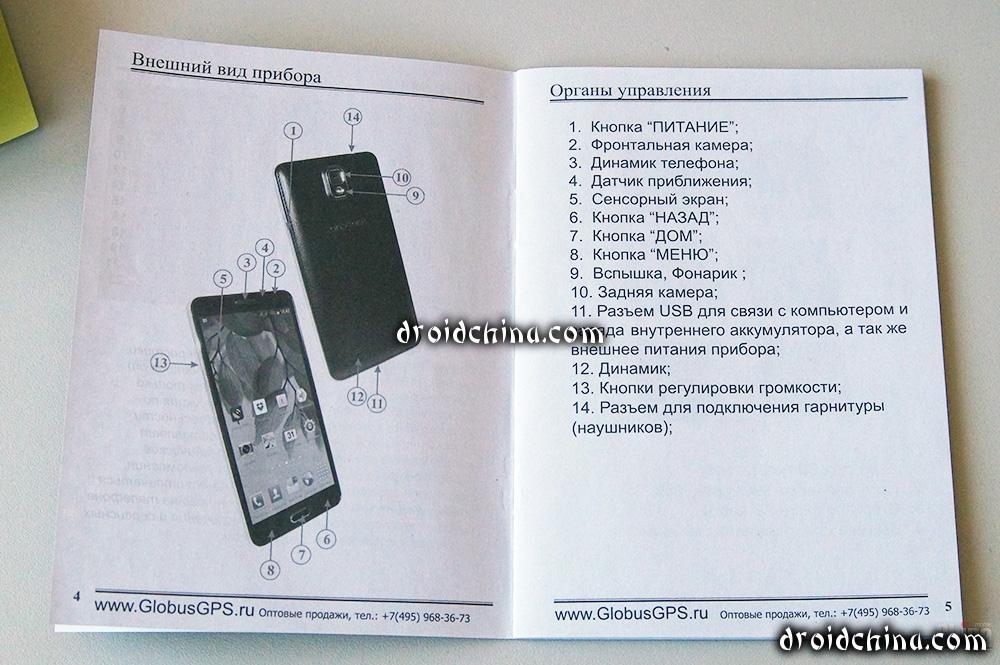 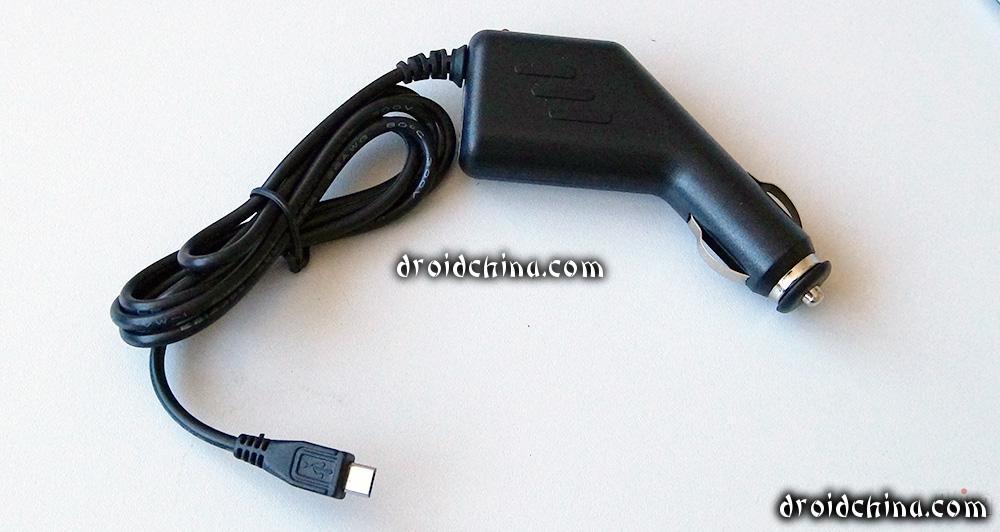 “Smart” case-book. The cover is made of plastic, which is modeled on the outside under the skin, though fairly high quality. But there are a few downsides. First, the cut-out display is protected by a plastic window. He’s not as transparent as glass, and easily scratched, it all strikes and spoils the appearance of the cover.

In addition, Case markedly increases the already rather big size of the device. But the Fail – is the lack of slots for sound control buttons. Although their case through the press is also possible, but it is not so convenient. 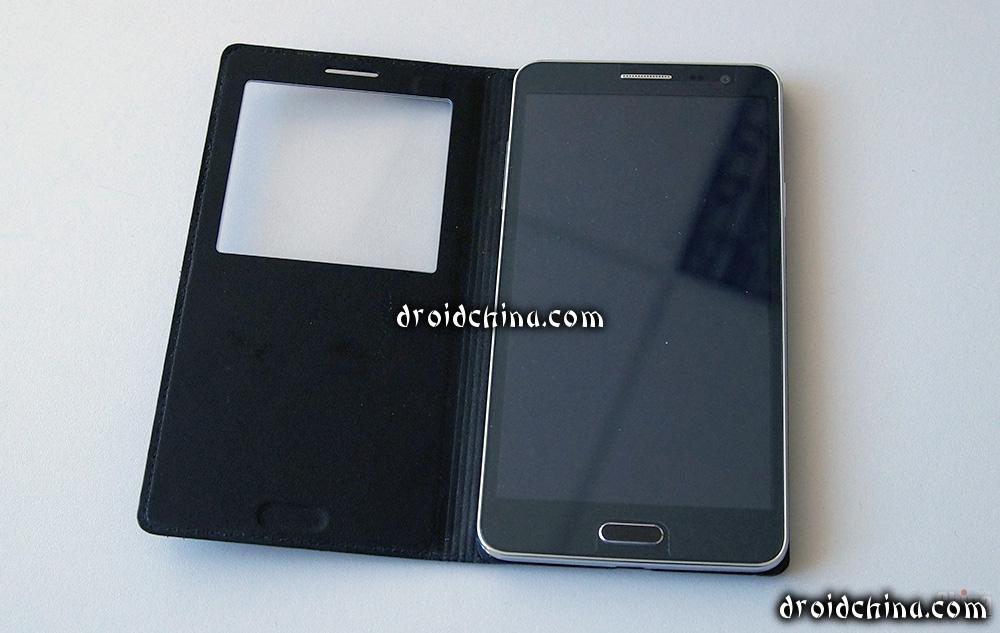 As it should be “smart” covers, it can interact with a smartphone. Honestly, the possibility of a cover pleasantly surprised, I thought it would be easier. When closed, the cover in a special interface box is activated. The screen displays the time, date, key indicators, missed calls, sms, and if svaypnut aside, the menu will appear with the player and the camera icon and calendar. 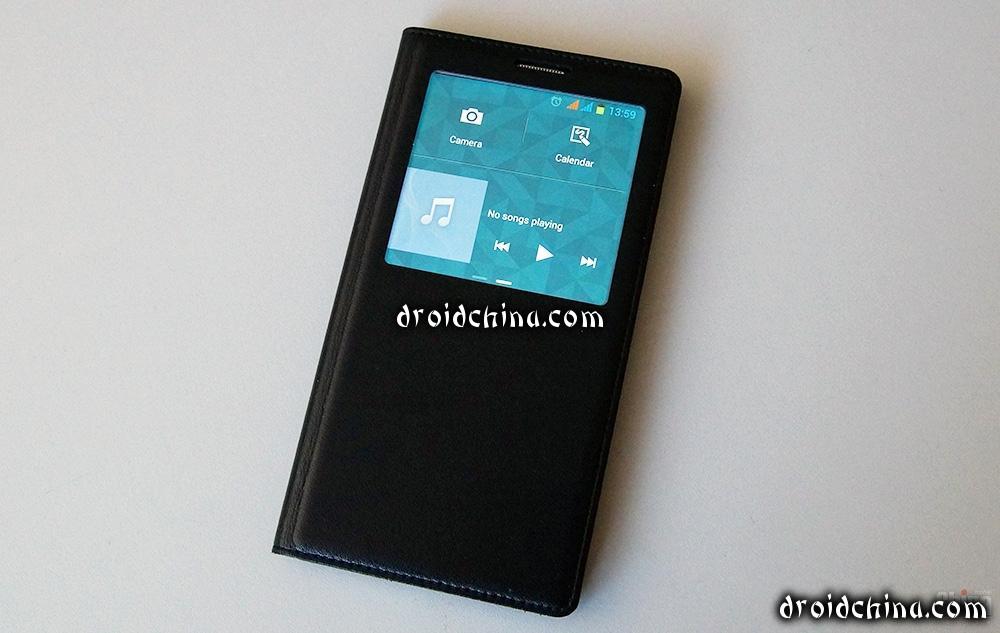 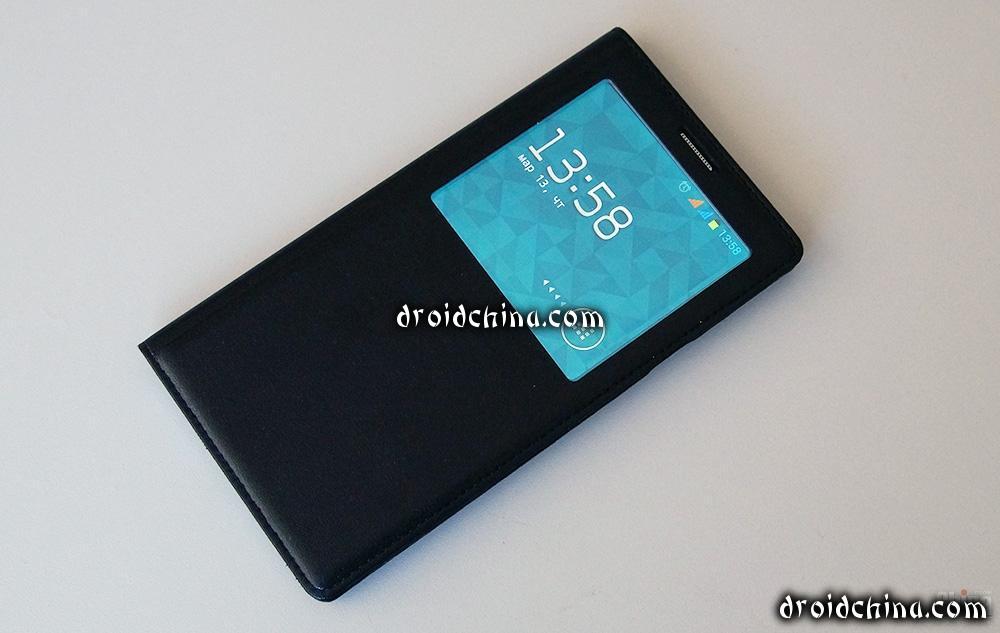 Push the plastic window is not very convenient, it seems that work with the old resistive screen. In general, a useful accessory, but ambiguous.

As noted above, cmartfon Navigator GlobusGPS GL-900 VIP design mimics the flagship Samsung Galaxy Note 3 . But there are some significant differences. Since GlobusGPS GL-900 VIP is less functional than a top smartphone Samsung, then it simply does not provide the design of the design features that are needed for some features Galaxy Note 3. Example, GL-900 VIP no stylus and thus holes it. Furthermore, no specific smartphone connector micro USB 3.0, no infrared sensor, and the external speaker is not positioned at the bottom, as in the Galaxy Note 3 and the rear panel.

But overall design GlobusGPS GL-900 VIP is easy to learn Samsung Galaxy Note 3, so if you like “Korean”, then please and “Chinese.” Quality materials and workmanship GL-900 VIP at a good level.

Key features of the design – the rigor and reliability. 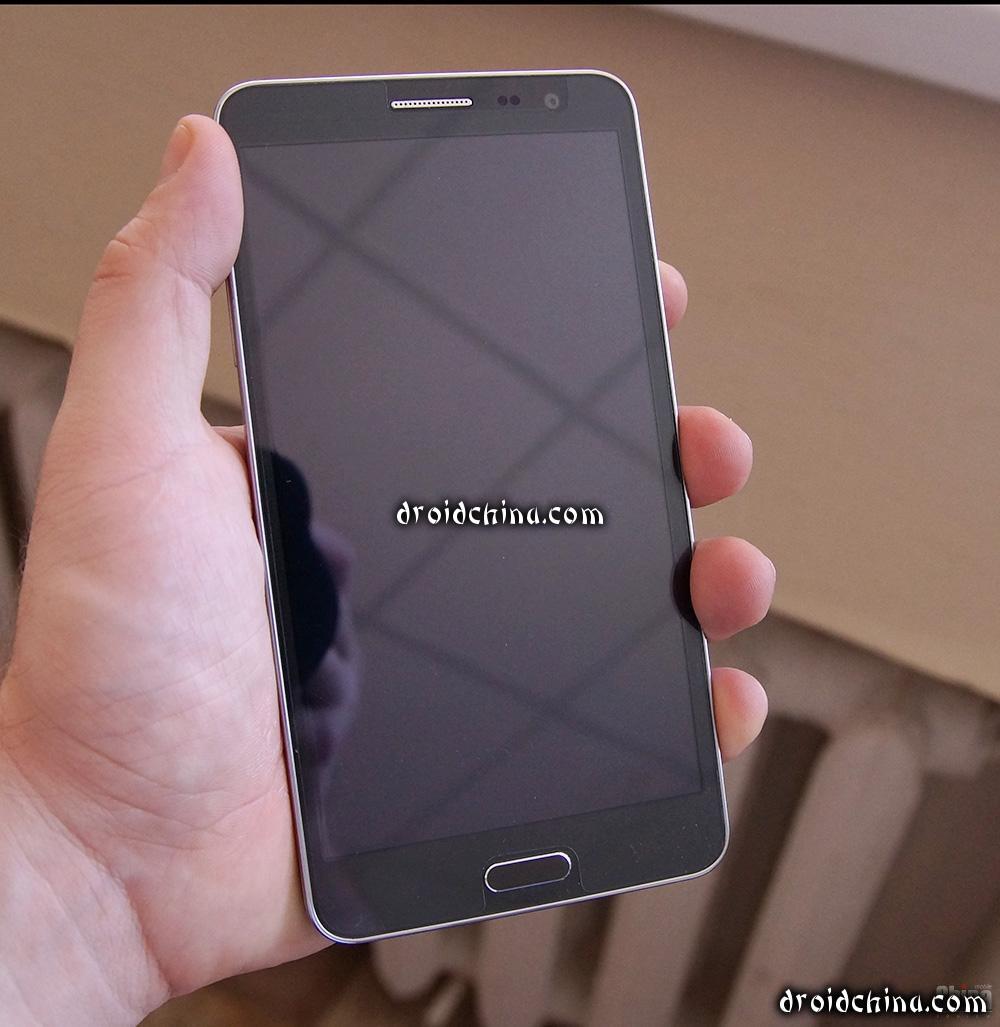 At the top of the front panel is traditionally facing camera, voice speaker, and light sensors and distance. 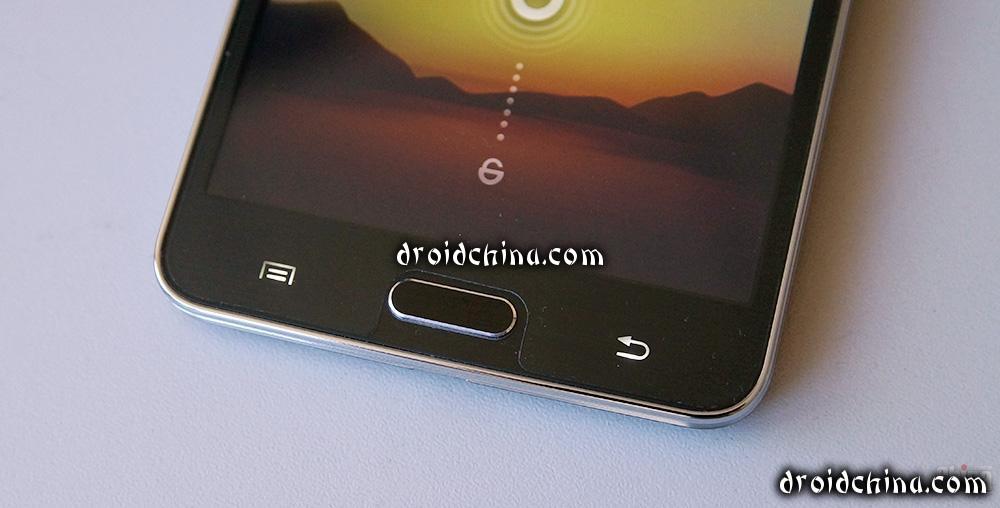 As the original Galaxy Note 3 touch buttons GL-900 VIP invisible when not active.

Bright lights, but not uniform.

Cover made of plastic, which is also stylized skin. At Galaxy Note 3 plastic cover more believable simulates the skin and is not in appearance, and as a material. There’s a softer plastic and solid here, and that gives the simulation. In addition, here cover more slippery. Nevertheless, smartfoncmartfon navigation unit is not heavy. 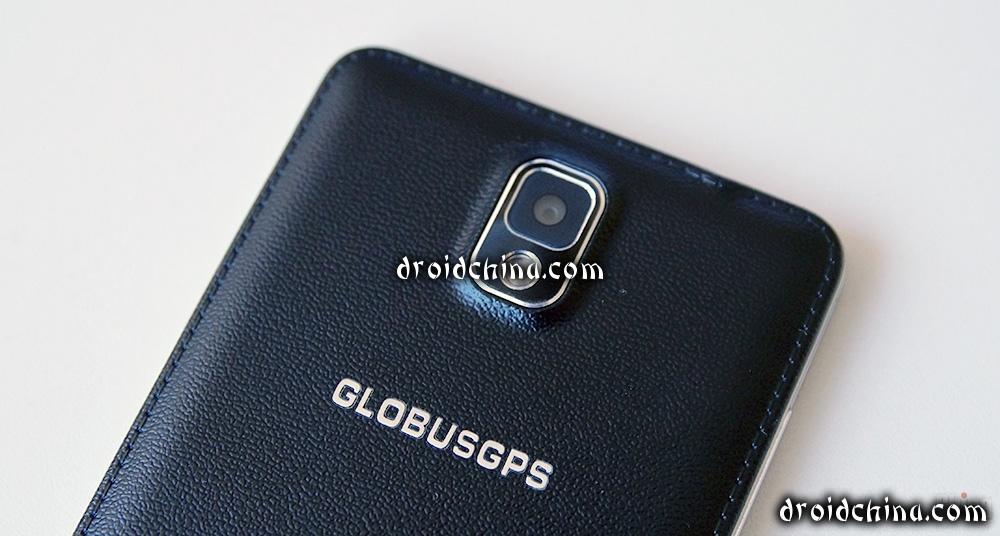 Outwardly it may seem that the smartphone border of metal, but it is not. All the same plastic.

GlobusGPS GL-900 VIP  got two connectors, Standard 3.5mm audio and microUSB 2.0 with support for OTG. Thanks to technology OTG can connect to the unit outer periphery – mouse, keyboard, flash drive or even an external HDD drive. 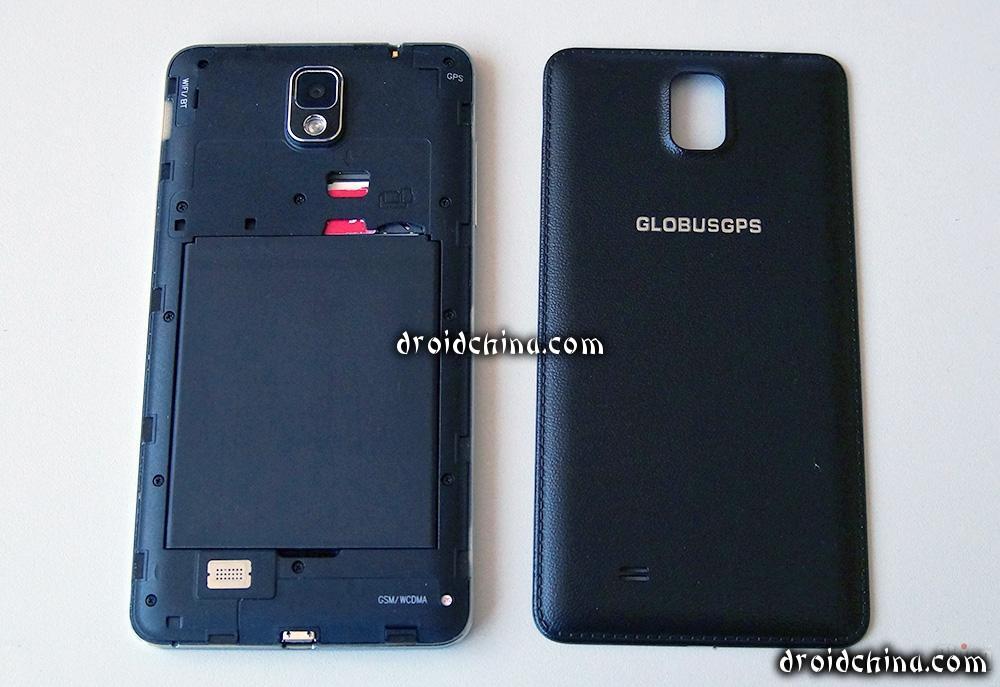 The rear panel is removable. Easily removed, is tight. Was noticed a small gap at the bottom, but nothing serious. Under the hood is the battery, two slots for SIM (one full, the other standard micro), and a slot for memory cards microSD.

The site GlobusGPS written that display diagonal of 5.8 inches. It is based on IPS matrix and the resolution is 1280×720 pixels. As for a budget smartphone, the display is very good. Touch sensitive, beautiful picture.

The display offers good color reproduction, sharpness and brightness, viewing angles are high. White cool white, black – closer to gray, but not critical. Almost no inversion. No protective glass, but out of the box on the screen already has film. 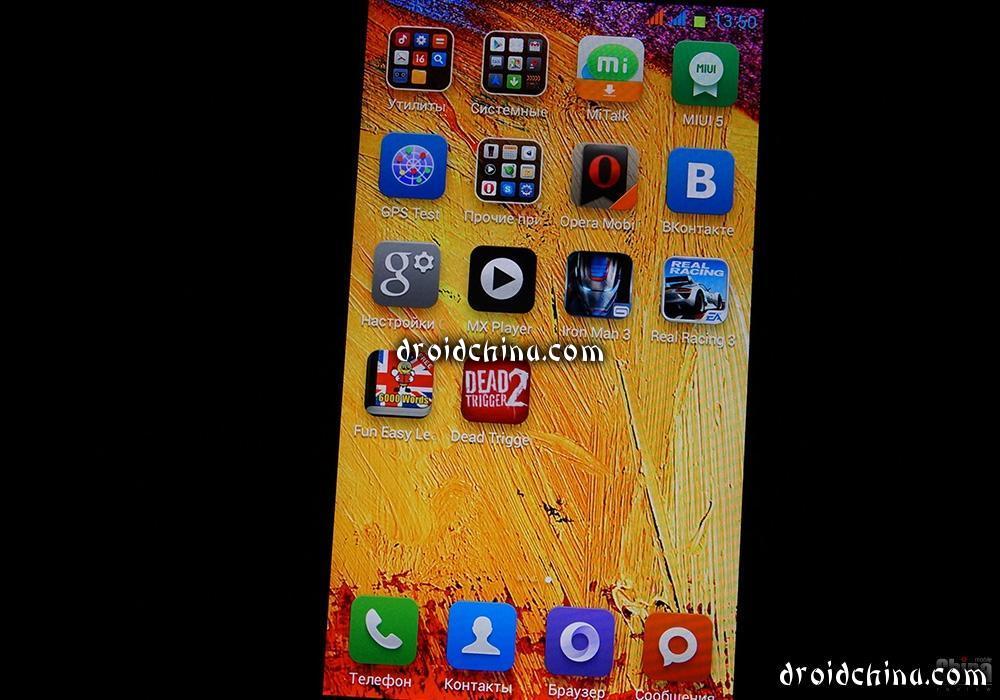 In the test apparatus Antutu clocked around 17,000 points, which is normal for such a system, and in general it is a good result. 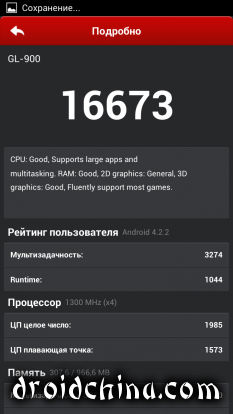 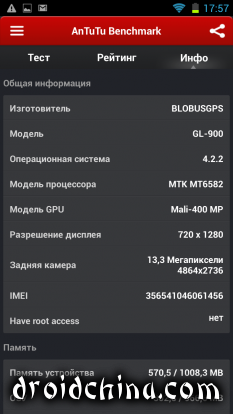 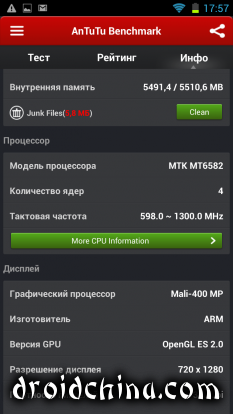 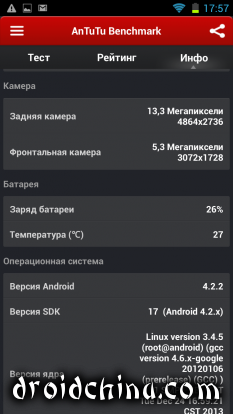 Performance GlobusGPS GL-900 VIP would be enough to handle most modern tasks (view video quality 1080p, fast web surfing, etc.), the exception – only the most voracious games. It should be noted that due to the GPU Mali-400 chip MT6582 play preferable than its analog predecessor MT6589/MT6589T that uses accelerator PowerVR SGX544. Nevertheless, the MT6582 platform – the decision not to gamers. Her horse – this is a reasonable value for the power and energy efficiency.

GL-900 VIP  supports simultaneous operation of two SIM-cards (in standby mode). Mobile telephony standards presented 2G (GSM 850/900/1800/1900) and 3G (HSDPA 850/900/1900/2100). Both of these standards and their frequencies are presented in all the countries of Eastern Europe, including Russia and Ukraine. Smartphone Navigator good catches network, signal keeps stable. But here is the quality of voice dynamics mean, however, the interlocutor can hear well.

Besides mobile communication, GL-900 VIP received support wireless technologies such as Wi-Fi standards b / g / n and Bluetooth 3.0. All the technologies work well and without complaints.

Primarily, the company has positioned GlobusGPS GL-900 VIP as a device for navigation. This makes sense, because the smartphone is equipped with a large display and a full-fledged GPS unit with all auxiliary functions including, A-GPS and EPO. In addition, for the needs of the user in the system preinstalled navigation software license “Navitel” c support libraries maps “Commonwealth” and “Scandinavia”. Package “Commonwealth” includes countries such as Russia, Ukraine, Belarus and Kazakhstan, “Scandinavia” – Denmark, Norway, Finland and Sweden.

“Navitel” is considered one of the most popular and quality navigators. Especially popular navigator uses motorists. Maps navigator stand high detail, and the program itself is equipped with a wide range of useful functions (instantaneous construct routes, traffic information, easy search, etc.). In general, “Navitel” becomes tighten bonus for any buyer.

As for the immediate work GPS, I can say that with all auxiliary functions cold start took about a minute, hot – seconds. Indoor navigation is practically powerless, but on the street or in a car all right. On average cmartfon Navigator detects up to 10 active satellites, it is not the best result, but that is enough. 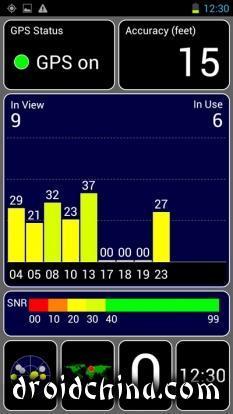 I note that in software environment GlobusGPS GL-900 VIP, there is another program that specialize in navigation. This firmware application GlobusGPS Tracker, which allows real-time track the location cmartfona.  Also by using this application you can find cmartfon Navigator , if it is stolen or lost it.

Front GlobusGPS GL-900 VIP equipped with a 2 megapixel camera on the back, – to 8 megapixels. Cameras are pretty decent, but within its class. If desired, and a good “wind” (ie lighting and perspective), you can get good pictures.

The front camera can shoot video as 480p. For video it will suffice. 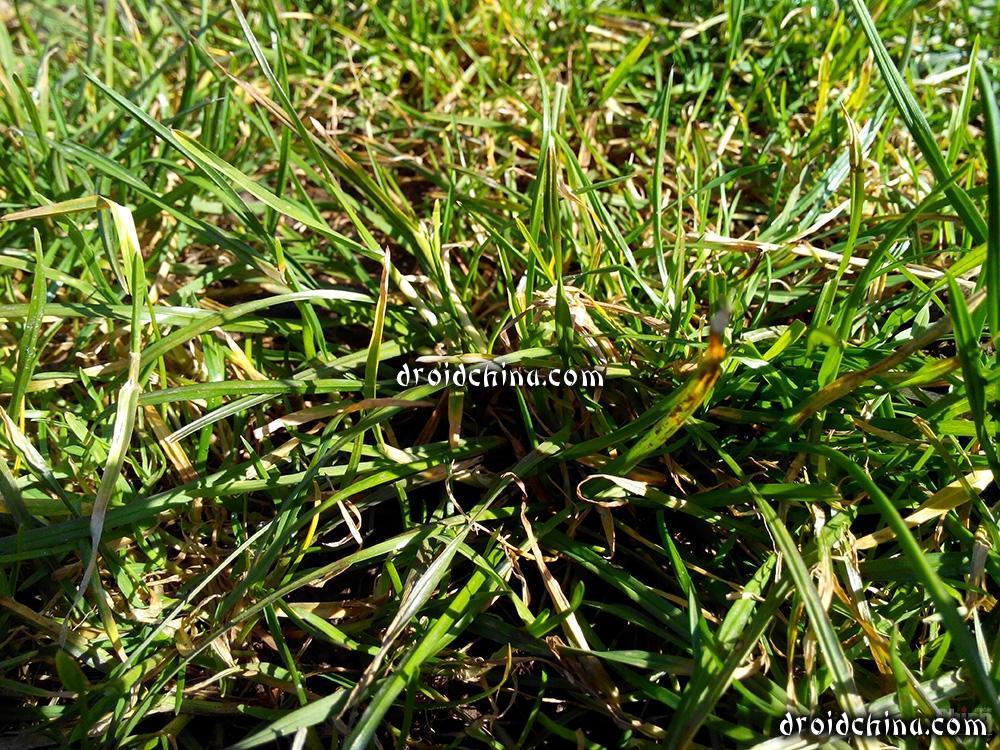 Back much better. Is the average power LED-lights, auto-focus, digital zoom, and video is recorded as FHD. Setting the standard. 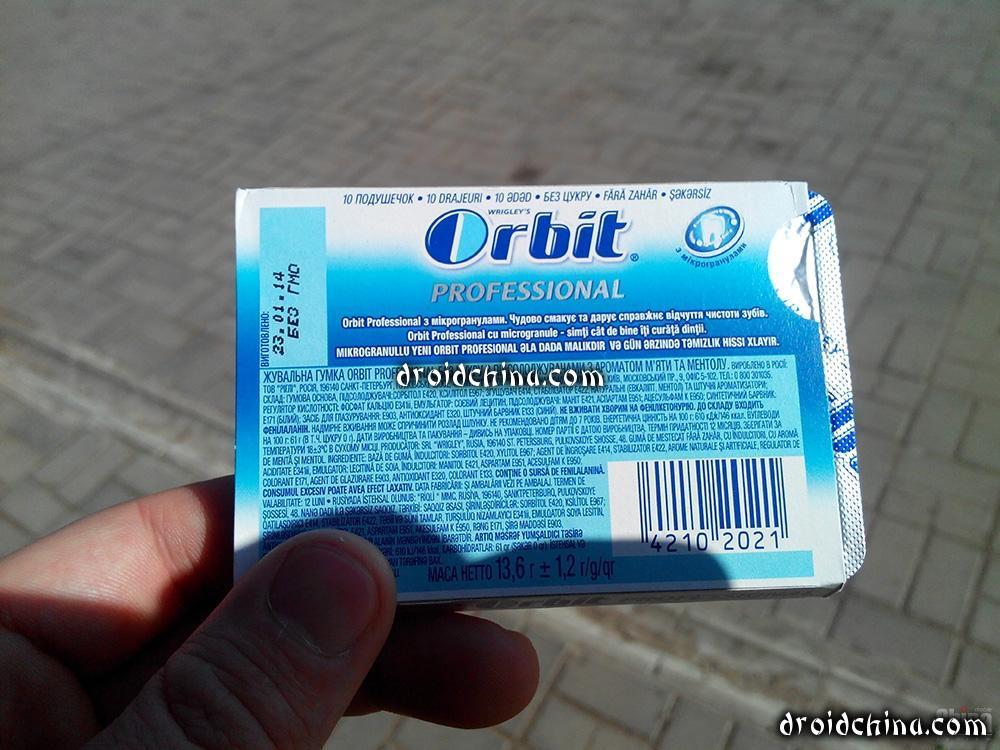 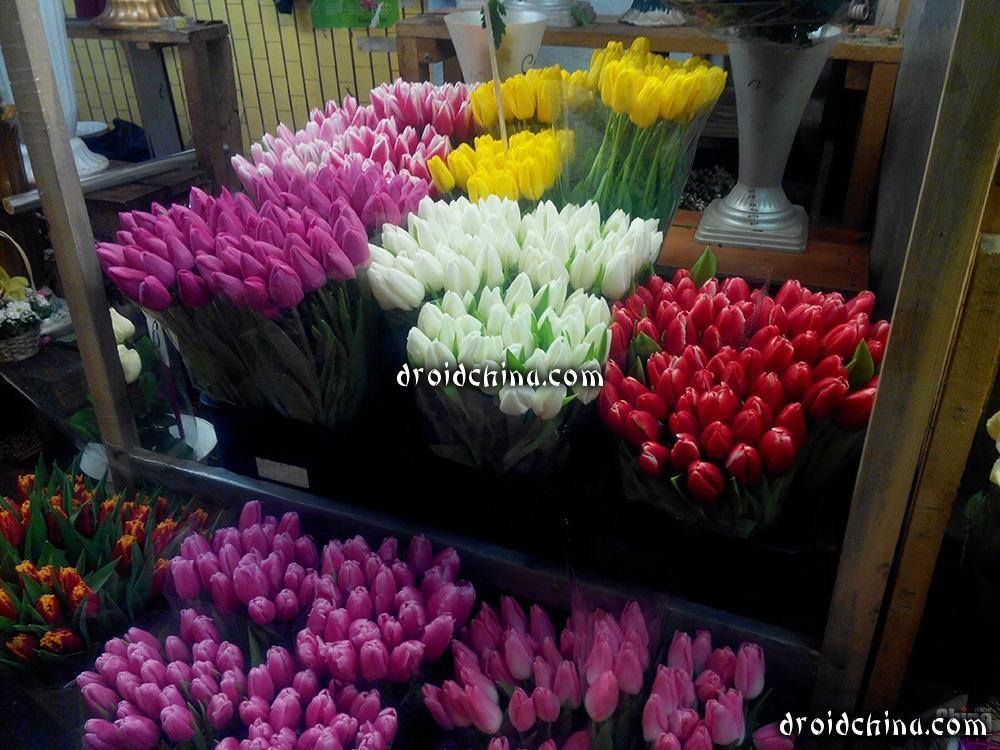 Responsible for food battery 2200 mAh. For a smartphone with a huge display it a bit. But, thanks to energy-efficient chip MTK and relatively low resolution, the device can be achieved by two days of work. It is basically a voice chat, music and the internet at least.If you actively use a smartphone – with GPS, video games and other things, it may not be enough for the day.

GlobusGPS GL-900 VIP copied from Samsung Galaxy Note 3 not only the design but also the shell software – proprietary interface Samsung TouchWiz. Furthermore, there is even support for gesture control. For example, a wave of your hand, you can flip through desktops or switch track in the player.

At the core of the software is running Android version 4.2.2. Multilingual system, with Russian and Ukrainian inclusive. To start full operation in the smartphone has all the most needed applications, including a standard set of Google services and, in fact, a key application of any system Android – store GooglePlay. On programs like GlobusGPS Tracker and navigation “Navitel” said earlier. 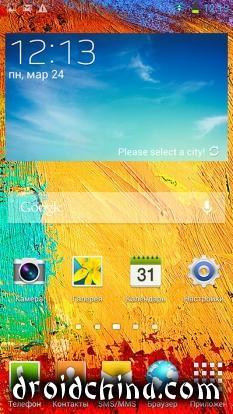 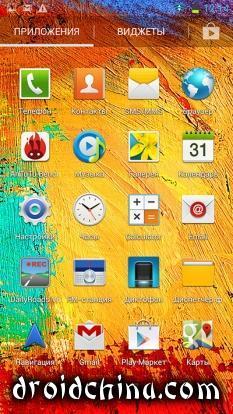 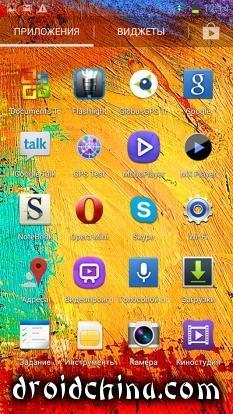 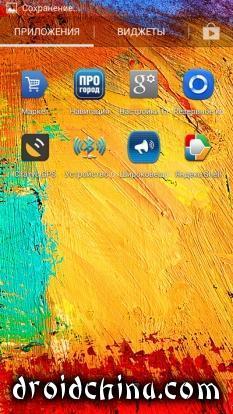 Also, if you do not like patterned shell TouchWiz, the system pre-installed as an alternative launcher Yandeks.Shell. This application is free and is distributed freely. If you wish, you can download it at the same store GooglePlay.

And please do not be. The fact that the animation envelope retarding. But as smartphone good performance, this is clearly the problem of poor optimization software. First, in that case have to do is install a third-party launcher, for example, the same Yandeks.Shell. It works correctly and flawlessly, all smoothly and beautifully.

Despite some flaws, the positives have GlobusGPS GL-900 VIP substantially more. As for the budget unit, the smartphone excellent display and a very rich collection. Another advantage GlobusGPS GL-900 VIP should include enough productive platform MT6582, support for two SIM and the possibility of expanding the internal memory. I think a strict and solid design in the style of Galaxy Note 3 for many will also be an advantage.

We should also mention the benefits of navigation cmartfona browser. Device is equipped with a full-fledged module GPS, has a large display, and out of the box in the system pre-installed various applications for navigation, including a licensed version of “Navitel” to build maps of “Commonwealth” + “Scandinavia”. In addition, for the needs of motorists in the kit provided for mounting on the glass of the car.

As for drawbacks, the obvious blunders discovered. There are minor issues, but they are not critical, especially given the price.

Discuss in our forums : http://droidchina.com/forum/Thread-GlobusGPS-GL-900-VIP-the-perfect-clone

Translated and edited from original source